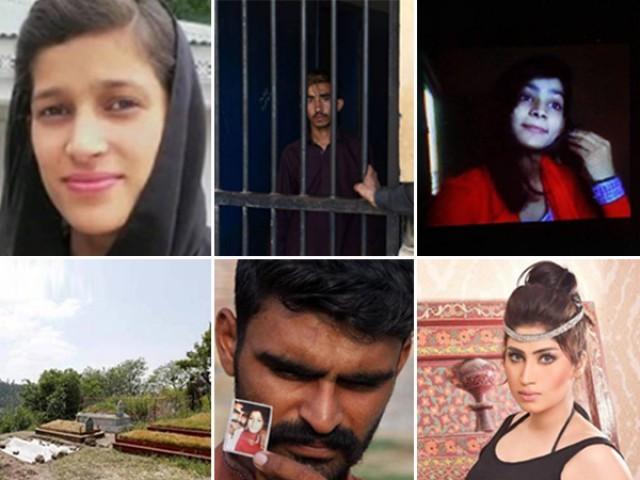 [caption id="" align="alignnone" width="600"] Photo: Facebook[/caption] Her murderer turned out to be none other than her own brother who strangled her

[caption id="" align="alignnone" width="600"] Photo: AP[/caption] Then, there was seven months pregnant Muqadas Tofeeq, who met her family at a clinic

Defiance, fear and hope might have intermingled, when they persuaded her that the disputes arising from her marriage were a thing of the past, and that reconciliation was now in order

Perhaps she had wanted her children to become acquainted with her parents and brother, despite the animosity of recent years

[caption id="" align="alignnone" width="600"] Photo: AFP[/caption] Teenager Zeenat Rafiq had been unwilling to go back to her family but her husband convinced her otherwise, after her love marriage

Her fears came true when on the pretext of arranging a proper wedding ceremony for her, her own mother set her on fire for going against the family’s wishes

[caption id="" align="alignnone" width="600"] Photo: AFP[/caption] And then there was Sumaira whose brother slit her throat because she had committed the ‘offense’ of talking to a boy

[caption id="" align="alignnone" width="600"] Photo: Reuters[/caption] The 16-year-old Ambreen was strangled and set on fire on the orders of a Jirga in Abbottabad, allegedly for helping her friend elope with a boy

[caption id="" align="alignnone" width="600"] Photo: BBC[/caption] And then there was Maria Sadaqat, who was set on fire ‘in the name of honour’ for allegedly refusing a marriage proposal

Though they are all dubbed as ‘honour killings’, perpetrated by the victims’ families or by influential people in society, there is nothing honourable in the reasons behind their executions, and they point to a serious miscarriage of justice, through which murderers are able to carry out violence against women with impunity in the country

What is honour killing? According to the Oxford Dictionary, honour killing means, ‘The killing of a relative especially a girl or woman who is perceived to have brought dishonour to the family

’ Honour killings occur when men believe that women of their family or of the community are responsible for upholding the honour or respect of the family, and feel ashamed if the women act in a manner deemed unacceptable to them

According to the Human Rights Commission of Pakistan (HRCP), there have been 309 cases of Honour Killings in the country in 2016 already

“Honour killings did not just begin to take place when Pakistan was born, but in fact is a sub-continental problem and even honour killings take place in the West,” said Husain Naqi, an HRCP official, while commenting on the origin of the crime in the country

“In Pakistan, honour killings have gained impunity because of the laws made by General Ziaul Haq

” It is also important to mention here that Islam does not approve of honour killings, as the religion repeatedly condemns murder

Islam also allows women to marry by their own choice, and thus slaughtering a female for exercising this right, is an extra-judicial crime

An attempt by females to break away from subjugation and assert their will is construed as rebellion by the family members and society, who feel threatened when the suffocating systems that they have developed, are seemingly endangered

In honour killings, the blame usually seems to fall on the victim and many members of the society hold her responsible for the fate that she has brought upon herself

Meanwhile, the aggressor can walk away scot free for committing an offense, in which he acts as the judge, the jury and the executioner

Reaction from civil society: The civil society by and large condemned Qandeel Baloch’s murder, as well as the other recent incidents of honour killings in Pakistan

[caption id="" align="alignnone" width="600"] Photo: Al Jazeera[/caption] [caption id="" align="alignnone" width="600"] Photo: Express[/caption] Some of the coverage on news channels about the celebrity’s assassination seemed slanted however, with airtime given to an ulema who declared that the murder of the model was a lesson to others

com/watch?v=4EU03rVjIRo Meanwhile, Twitterati also expressed shock and disgust on the spike in honour killings in the country on social media

Honour killing was also the subject of a documentary A Girl in the River-the Price of Forgiveness by Pakistani filmmaker Sharmeen Obaid Chinoy, which won an Academy Award

’ Yet these are some of the saner voices

The CII declared that though honour killing is against the law of the land, being provoked after witnessing a moral sin by a close relative is an element of human nature

Politicians from both the main opposition parties, the Pakistan People’s Party (PPP) and the Pakistan Tehreek-e-Insaf (PTI) slammed the deaths, calling them inhuman and un-Islamic

State of legislation:  In order for a bill to become law, it needs to be approved by both the houses of parliament (the Senate and the National Assembly) in Pakistan

The bill will now be presented in the parliament and has to be approved by it, in order to become a law

One major fallacy in the honour killing bill in its current form is that there is a reconciliation clause in it, so that family members can pardon the brother, husband or the family member etc

, who commits the honour killing

As a result of this, the culprit can be easily released from prison, while the victim often has to pay with her life

Minister for Law and Justice Zahid Hamid has claimed that the parliamentary body has now plugged this loophole in the honour killing bill, so that relatives will now be able to pardon the killer only of capital punishment, but he/she will still get a mandatory life sentence of twelve-and-a-half years for his offence

“We are committed to pass the honour killings Bill and will pursue it further,” said Uzma Bokhari, a politician from the ruling Pakistan Muslim League Nawaz (PML-N) government in an interview

” Meanwhile, in order to avoid the reconciliation clause in Baloch’s homicide, the police have transformed the First Information Report against her killers into a non-compoundable FIR, so that her family can no longer pardon her brother who has committed the crime

After committing the slaying, the accused claimed to have carried out the murder to ‘protect the family’s honour’, when in fact they hoped to escape with a lighter penalty for their crime

Way forward: The only sensible way forward is for the government of Pakistan to pass the honour killings law immediately and give exemplary punishment to those involved in the heinous crimes

When the state makes an example out of families involved in killing their daughters, sisters, mothers and so on, these steps will go a long way towards ensuring that other people also respect the law of the land

Long term measures are also needed however, before women receive their due share in the Pakistani society, so that they are not traded off in family disputes or are not sacrificed to satisfy flimsy notions of honour

Baloch’s death revealed the hypocrisy entrenched in the Pakistani society where many vilified her, but were also quick to view every video that she shared, or comment on every photo that she posted

Her methods might not have been sophisticated and aimed towards getting her quick media publicity, but she still boasted 772 hundred thousand likes on Facebook and 47K followers on Twitter

What’s wrong if women exercise their free will over their minds, bodies and lives and refuse to conform? Why are male egos so fragile and misogyny so deep-rooted in Pakistan that any female who rebels and lives life on her own terms, must be chastised while men can get away with absolutely anything that they want? Why is honour only limited to a woman’s vagina, while men seem to have a life-long impunity for their actions, based on their gender? What is so immoral if females choose their own spouses when the religion and the state grant them this right? Any girl in Pakistan could have easily been in Qandeel, Muqaddas, Zeenat or Sumaira’s place, and pity the nation which treats a significant portion of its population this way

And only time will tell, whether the cold blooded murders of six women (to count a few) in the last four months, will shock the Pakistani government out of its stupor, or if it will continue to look the other way