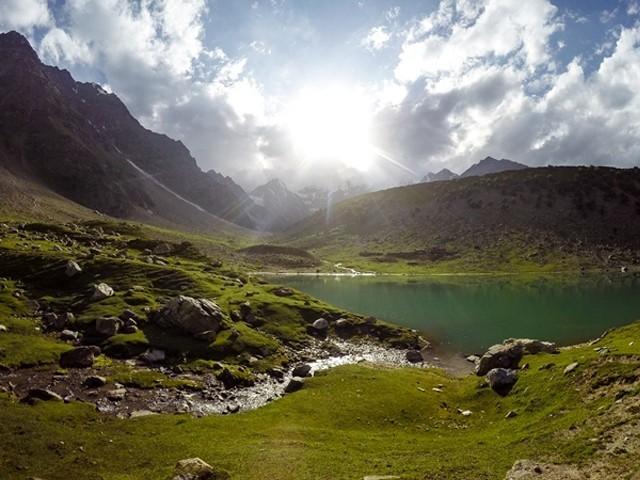 Referring to the tragedy back in 2013 when the ‘Killer Mountain,’ famous for its notoriously high fatality rate, gave its nom de guerre another dimension for altogether different reasons

But alas, in Pakistan the value of a human life is directly correlated with wealth, power and status

The district government that organised and supported the event had transported horses and all the paraphernalia but not one garbage dumpster was in sight! As we speak, Shabbir, the khokha owner, empties the remaining biscuits in a plate and conveniently chucks the packet behind a boulder

A small pile has gradually accumulated there

Noticing my unamused look, he assures me not to worry as this will disappear in a few weeks

[caption id="" align="alignnone" width="456"] One of the many tent khokhas[/caption] Puzzled, I inquire if there is some sort of a cleanup drive by the authorities expected now that the Polo Festival is over? “Andhi Toufan sub kuch apnay saath ura lay jaeey ga” (The wind and storm will sweep this place clean), he replies nonchalantly

Sadly this is the attitude shared amongst many others who only come to the northern areas for commerce, depicting a complete lack of empathy or understanding of the environment and the eco-system; selfish to say the least

Enjoy, plunder and “Allah pay choar do” (leave it to God) a convenient excuse we have all become so attuned to

The district government, on the other hand, was preoccupied putting up banners boasting the names and faces of the district and provincial officials backing the event

Needless to say, there was no provision for basic toilet facilities despite knowing that an entire districts populace would be descending on these beautiful meadows during the festival

Going only by the distance is utterly deceptive in this region

I regretted doing just that

Aisar was revving up his bike that had been returned to him by a friend, as I reached Choungrah

Shaking his bike to get a feel for how much petrol remained in the tank, while the needle pointed dead straight at empty

[/caption] As if he read my mind, Aisar cheerfully said, “Bhai I can take you as far up as the petrol lasts,” And signalled me to hop on

The sun had already gone down

The pine, juniper and cedar trees cast ghostly shadows that stretch across the landscape in the moonlight

The two guest houses at Rama – PTDC and forest are both fully booked, as is the case during summers, mostly by government dignitaries

Aisar insists that I have dinner with his family

Their baithak (lounge) is large enough to accommodate 25 odd guests

Lamb korma, rice chapatis and raita followed by kheer are delicious yet unmatched by the warmth of the young and generous man that I have only met a couple of hours ago

The lake is magnificent

On a clear day you can see Nanga Parbat

In fact, you can trek to the east side of Nanga Parbat from Rama Lake

Sadly, the entire route to Rama Lake is screaming of deforestation

I see thick and tiny stubs protruding from the ground, reminiscent of mighty greens that thrived there once

Perhaps this time we will not wait for a bigger tragedy to jolt our collective conscience into action, and save the meadows from becoming a deforested garbage dump