Was Quetta an ISIS job or a JuA job? Or was it a joint effort?

Home Blog Was Quetta an ISIS job or a JuA job? Or was it a joint effort? 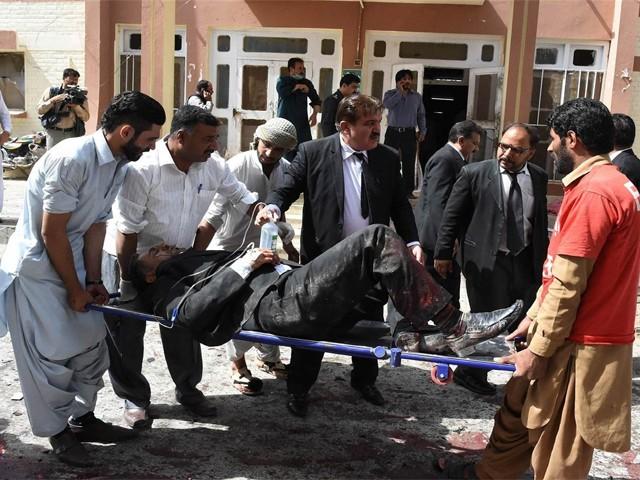 As tends to happen in the aftermath of a violent attack in Pakistan – or sometimes even while the event is still unfolding – media pundits, armchair commentators and general observers on social media jump the gun and start asking all the wrong type of questions

“Why hasn’t [insert just about any country/government/politician/world leader name] taken a stand against the perpetrators?” “If this is not terrorism then what is?” they ask

Or, my two favourites, “Why won’t Facebook come out with an [insert flag colour scheme] filter for this specific tragedy?” and “why won’t mainstream media dedicate a day’s worth of coverage on this?” By now we are all too familiar with the melodramatic lamenting that inevitably follows each crisis of the last decade as people try to cope through memes, articles, tweets and Facebook posts

Truth be told, in Pakistan, the novelty of terrorist attacks remains

And so we continue to ask over and over again: How come the media goes to 24/7 coverage and the world lights up its landmarks when terrorists kill in Paris, Brussels, and Orlando but when terrorists kill in Beirut, Baghdad, and Quetta, the news is met with barely a raised eyebrow and rushed, regurgitated condolences offered by world leaders? Is it because the lives of the people of Pakistan matter less than the people of Paris? A few years ago, Nour Kabbach, a Lebanese humanitarian aid worker, did service to the feeling of having one’s tragedy deemed ‘not good enough’ by world leaders’ and international media

kabbach/posts/10156152101630361"][/fbpost] Kabbach’s words get at the heart of a popular, longstanding theory that white faces covered in blood are more newsworthy and attention-worthy than black or brown faces

But that doesn’t change the fact that continuing to vent our frustrations over the lack of attention is a troubling and, ultimately, futile exercise that only winds up detracting from the sum equation of the tragedy: the lives lost, the livelihoods ended, the families and cities destroyed

Essentially, our all-too-familiar pattern of theorising, speculating and postulating following a horrible tragedy is useless and serving

Because we have rote memorised this familiar pattern, we know with measured certainty that in the upcoming days, possibly even weeks, the hash tags and solidarity posts will light up the darkened cyber pathways

But while our ‘thoughts and prayers’ will slowly flicker and burn out and we will all return to carrying on in a business-as-usual fashion, for Quetta the dust will have barely settled

So, while I understand, and to some extent, share the desire for global solidarity, the current dialogue is tired of detracting from the greater crisis looming large on the horizon of Pakistan

We should not be asking why a newsroom, a couple hundred thousand miles away, is not covering our story

Quetta, an already lawless wasteland, was turned into a literal definition of lawlessness in a matter of seconds

While our leaders continue to confuse the easily confused masses, sending an already distraught nation on a goose chase towards the eastern border of Pakistan, the real issue that terrifies me to my bone marrow is how the state of Pakistan, despite having claimed success in its Operation Zarb-e-Azb, is still unaware when it comes to knowing who is who in the zoo of terrorist groups operating inside and around Pakistan

Was Quetta an ISIS job or a JuA job? Or was it a joint effort? I’m not a national security expert but I know that co-operations and allegiances are not uncommon between Islamist terrorist entities

For this reason, it is possible that the conflicting claims for responsibility actually indicate the existence of a formal alliance between the two terrorist organisations

Or maybe it’s not

Either way, I find it hard to care if some media outlet across the world is investing talk time towards my country when the people running my country aren’t even sure what’s going on in their own backyard

Friend and fellow journalist Abdul Basit summed it up best on Facebook: “The Quetta attack is a wake-up call and it asks for revisiting our entire approach to internal security and (to understanding) the linkages between the internal security with the regional and global geopolitics

The world is changing rapidly and our political and military leadership need to show more flexibility in their decision-making, our diplomatic corpses have to be more imaginative and the civil society along with the intelligentsia and academia need to come up with local answers which can be used as antidote to violent extremism

This is a generational struggle

” And so to Pakistanis I say, quit worrying about the international community’s response (or lack thereof)

We have bigger, more urgent problems dealing with the convoluted and complex mess brewed up by our own people inside our own borders

And to Pakistan, I say this: you literally had one job