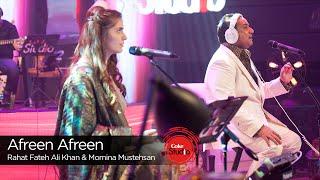 Coke Studio started nine years ago, and succeeded in bringing famous Pakistani singers together on a platform in order to recreate some of the most legendary songs of the past

When I say recreate, it should be made clear that recreation does not mean singing it again, as it is, rather it means creating something new, with the essence of the old

While the latter is a passionate qawwali of an admirer completely blindfolded by the beauty of his lover, the Coke Studio version praises the lover with subtlety

com/watch?v=7iykoYRLiG8 The original Afreen Afreen showcases the lover talking to himself; whereas the Coke Studio version turned the song into a praise of beauty for its listeners

The different versions highlight two completely opposite, yet equally beautiful ways, of praising the love of their life

Although Rahat Fateh Ali Khan seldom sings duets, when he does, his powerful voice overpowers the vocals of his female counterparts, for example, Shreya Ghosal

Shreya Ghosal is an extremely talented singer, but the duo were a mismatch in Teri Meri Prem Kahaani

On the other hand, Momina’s voice had the perfect amount of edge and innocence; her voice complimented his voice, as well as the song perfectly

com/watch?v=UNWUovPzQng Direction The direction of the song is what makes it one of the most beautiful recreations so far

” (Your eyes met mine, and ever since then a spell has been woven, I feel I have become beautiful) The aforementioned line adds a beautiful and holistic feel to the narration of the song

Another plus point about this version is that the male and female vocals are not arranged in a conversational manner, as normally done in duets

Instead, they are arranged as parallel solo thoughts that enhance the emotion behind the song

Rahat, Momina, and Faakhir Rahat Fateh Ali Khan gave his best, he submitted himself entirely to the song and that strongly resonates throughout

He tried to recreate a legend in the best possible way

Momina is a total charmer

That’s what you call screen presence and talent

Lastly, Faakhir did a splendid job with the music arrangement