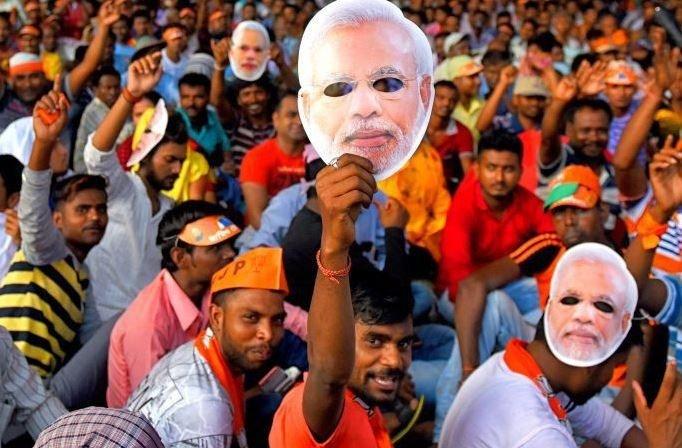 Indian and foreign media reports are rife with repeated incidents of lynching of Muslims and Dalits, destruction of churches, trolling of scholars, detention of activists, the harassment of movie stars, persecution of the minorities, the erosion of fundamental rights, distortion of history, the usurpation of social media by hate speech and fake news and propaganda and encouragement of vigilantism

The same alarming situation also found words in a Congressional briefing of President of Genocide Watch Dr Gregroy Stanton a few days back, who had warned that something similar to the inhumane Rwandan genocide could happen in India if stern action was not taken by the government of India

A fascist India has emerged with entrenched Hindutva hate ideology

Arif Alvi (@ArifAlvi) January 15, 2022 During a briefing in Washington DC, he also referred to the event of "Dharam Sansad" organised in Haridwar, where members of Hindu right-wing members made genocide calls against Muslims

“As the leader of India, he has an obligation to denounce this genocidal speech

Yet, Narendra Modi has not spoken against it,” foreign media quoted the president of watchdog as saying

According to experts, the reason extremist groups in India are on the rise, is clear; they have impunity and support from the Modi-led government

Read more: Calls for Muslim genocide at Hindu religious assembly spark outrage in India Contrary to it, “India prohibits hate speech under several sections of its penal code, including a section which criminalises “deliberate and malicious acts” intended to insult religious beliefs,” they added

Human Rights Watch in its latest World Report 2022 unveiled on Jan 13, said that Indian authorities had intensified their crackdown on activists, journalists, and other critics of the government using politically motivated prosecutions in 2021

“The Indian authorities have given up any appearance of tolerating dissent and are using the machinery of the state to silence critics,” said Meenakshi Ganguly, South Asia director at Human Rights Watch

“At the same time, the BJP government has created an atmosphere in which minorities feel unsafe, at risk of assault by ruling party supporters

” As per media reports including CNN, Amnesty International USA, Genocide Watch, and 17 other human rights organisations in the US had also raised similar concerns about the plight of Muslims in India during the Congressional briefing

The Human Rights Watch report said that many of the alleged murders went unpunished in part due to delayed police investigations and “rhetoric” from ruling party politicians, which certainly had incited mob violence

At an event organised by Yati Narasinghanand, the priest of Dasna temple in Ghaziabad, targeted Muslims and urged Hindus to take up weapons against them

“Swords look good on stage only

This battle will be won by those with better weapons,” Indian media quoted him as saying

Later, another event in continuation of Hardiwar was organised and hosted by the Delhi section of the Hindu Yuva Vahini, at the Banarasidas Chandiwala Auditorium

PHOTO: APP/FILE In 2018, India’s current Home Minister Amit Shah was quoted by the Indian media as saying that Muslim immigrants and asylum seekers from Bangladesh were “termites” and promised to rid the nation of them

In 2015, Sadhvi Deva Thakur, then a senior member of the Hindu Mahasabha group, caused widespread controversy when she told reporters Muslims and Christians should undergo forced sterilisation to control their population growth

Similarly, various Hindu right-wing members including the BJP and journalists also called for genocide against Muslims and asked Hindus to buy weapons to unleash a Muslim genocide

One of the members, Sadhvi Annapurna Maa was seen bragging “Nothing is possible without weapons and we have to carry a knife or sword to kill them if you want to eliminate the population kill Muslims

If 100 of us are ready to kill two million Muslims, then we will win and make India a Hindu Rashtra

Be ready to kill and go to jail”

International political observers said that the Indian government was allowing hate speech and calls for violence, and its silence over the rising spectre was underscored by the meekness of the political opposition

The silence of Modi and his inability to condemn the open calls for mass genocide made during the right-wing Hindu gatherings could be interpreted by his most-extreme supporters as a tacit signal of protection, they added

” Michael Kugelman, from the Wilson Centre, had hit out at the Indian government for its silence

“Not a peep, much less a condemnation, from the gov’t

According to Human Rights activist and lawyer Vrinda Grover, any group inciting violence was barred under Indian law

“Police, states and the government are responsible to ensure (inciting violence) doesn’t happen”

“But the state, through its inaction, is actually permitting these groups to function, while endangering Muslims who are the targets

” On Gregory Stanton remarks, Foreign Office Spokesperson Asim Iftikhar Ahmad said that his warning is based on data assessed on a scientific model of 10 stages of Genocide

According to this model, he said, India has crossed all 10 stages, raising serious alarm for the safety of more than 200 million Muslims in India

It may be recalled that Pakistan has been warning of grave consequences for minorities, especially Muslims, due to the extremist "Hindutva" ideology being propagated by the RSS-BJP regime with impunity in India