MQM-P vs PSP, PML-N vs PPP – Who will secure more ‘biryani’ votes in the 2018 general election?

Home Blog MQM-P vs PSP, PML-N vs PPP – Who will secure more ‘biryani’ votes in the 2018 general election? 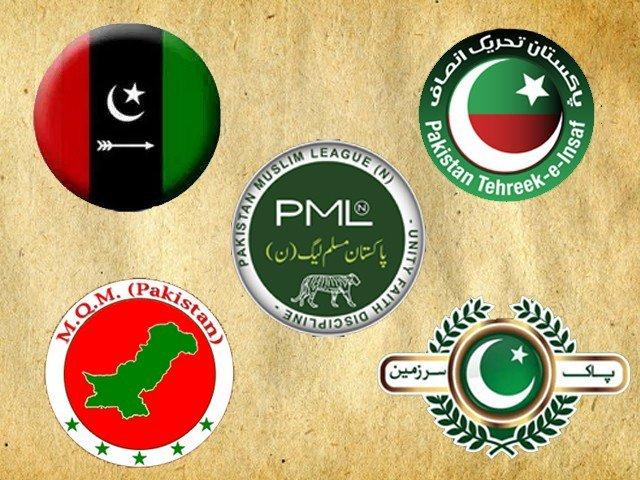 Since the 2013 General Election, Pakistan has been in a state of political and administrative commotion

Imran Khan’s dharna after the infamous “rigging” was the first real threat to the government, with the opposition marching from Lahore and sitting on Islamabad’s streets for several months on end

For a moment, it looked like the dharna would produce the results that the opposition wanted, but the government held on, turning the protest into an extended concert and dance party

The dharna was called off after the Army Public School (APS) massacre in Peshawar, when numerous quarters criticised Imran for not giving attention to the province where his party held the provincial government

At that point in time, Nawaz Sharif looked unassailable and his government rock solid

Not only had it survived the Model Town backlash, it had also seen off the tabdeeli (change) at D-Chowk

However, it was not for long

The opposition got its big break when the Panama Papers controversy broke internationally, leading to the resignation of numerous heads of states and politicians abroad

The Panama Papers investigation finally led to the disqualification of the then prime minister, Nawaz Sharif, who had to handover the reigns of the government to Shahid Khaqan Abbasi

The Pakistan Muslim League-Nawaz (PML-N) was undeterred by this monstrous loss, and enacted legislation to re-elect Nawaz as the leader of the party

Despite what the opposition says, I still believe that this government will live out its five years in office

There will be no early elections

There was a time during the Faizabad protests which beckoned the dissolution of the government ‘by its own design’, however, that did not come to fruition

So how will the 2018 election, the other season in Pakistani politics, fare on our political parties? Here is my take on it

The more urbanised cities vote differently from the rural ones, and there have only been two main players in the market – the Muttahida Qaumi Movement-Pakistan (MQM-P), and the Pakistan Peoples Party (PPP)

There are of course other parties in Sindh, like Jeay Sindh Qaumi Mahaz (JSQM), Awami National Party (ANP), Jamaat-e-Islami (JI) and Pakistan Muslim League-Functional (PML-F) led by Pir Pagara, but they have too little influence to be of any weight in the whole process at the moment

The urban/rural population split is quite dramatic in Sindh; therefore it’s safe to assume that PPP will win the rural seats along with some of the urban seats

Rural Sindh is not only the spearhead of PPP’s election campaign; it is also quietly working towards making Sindh more politically effective in the National Assembly (NA)

He lamented the maladministration of the Sindh government in the city, as well as the localities connected to the city

However, he also related something more shocking, that the average number of children per household is on average more than 10, saying, “One of my brothers has 24 children, and another close to 20

” The Sindh government is tacitly allowing this, despite the fact that we cannot possibly bear the brunt of a large, uneducated and underprivileged population which requires programs like the Benazir Income Support Program (BISP) to survive

I guess they are thinking if they cannot secure more votes and parliamentary seats one way, they should have a large zombie population to vote for them and win the election that way instead

The party, led by renowned former mayor of Karachi, Mustafa Kamal, has been making long yet quiet inroads into Karachi as well as other urban centres of Sindh

With their agenda being nationalistic rather than on the ethnicity most of its members belong to, they have managed to become quite popular in a short period

They even managed to receive welcome from areas formerly life-threatening for Muhajirs, such as Kati Pahari and Lyari

According to estimates, the party is closing in on a 100,000 party members, which for a year and a half of work is quite impressive

To top it off, MQM-P was ready to merge into PSP with both re-emerging as a new political entity, till the Muhajir workers of MQM-P mutinied and gave Farooq Sattar no choice but to retract his statements and play the resign and then take it back game, ala Altaf Hussain

PSP has the advantage of being underestimated by other established parties, which may give them an element of surprise; however, on the other side of the coin, PSP needs to be extremely wary of the emotional attachment large sections of Karachi’s population still feel for Altaf

However, it is my guess that PSP will fare much better than what people are predicting for them

The Pakistan Tehreek-e-Insaf (PTI), which gained relatively high support from the masses in Karachi, will see a significant downturn in their voter numbers

Punjab There is unfortunately only one way the Punjab vote will go, and that is to Nawaz Sharif and PML-N

Despite his disgrace from politics, Nawaz will manoeuvre his brother Shehbaz to take over the mantle as prime minister when they win the elections

Shehbaz has been working diligently within the province since the Sharif brothers return to Pakistan, post-Musharraf

Always found in the role of Chief Minister Punjab, Shehbaz has been building the province and winning support across PML-N’s primary voter base

He has gone so far out as to send youths from Punjab to China to learn their language, a project that was also earmarked for the youth of Balochistan

While Balochistan has yet to benefit from such schemes, as far as Punjab is concerned, they have had the desired effect

There is a reason why many people from other provinces call the state of Pakistan a ‘government of the Punjab, by the Punjab, for the Punjab’

Maryam Nawaz is touted to be the next chief minister of Punjab, provided of course the courts do not decide against her in the #Fontgate trial underway

If convicted, she may be disqualified like her father

In that case, Hamza Shehbaz will take over from his father as chief minister of Punjab

PTI’s fortunes in Punjab will dwindle from the last time round, and they may not be able to win more seats than they did last time

While the Supreme Court verdict will help Imran’s credibility, whether this victory will convert into votes is another story altogether

Balochistan As is with every oppressed segment in society, Balochistan’s seats are too little to cause any stir in national politics

With the insurgency largely under control, PML-N will probably be making new alliances to hold on to power and retain their coalition government in Balochistan

The religious parties have been on a roll since their Faizabad victory, but that will hardly make an impact in Balochistan, where the Jamiat Ulema-e-Islam-Fazl (JUI-F) and the like were not involved in the protests

The PPP is trying its hand at making inroads, but as of now, it seems not much will change the political landscape of the province

The constant oppression and genocide of the Hazara community within Quetta, the regional capital and its outskirts, has raised numerous questions regarding the role of local politics in the whole situation

However, if history has shown us anything, it is that cowardice is the most prevalent trait in our politicians

Despite the stereotypes associated with the region, K-P has remained at the forefront of adopting new political thought for their own benefit

They embraced PTI in the last elections, and will probably stick by them in the coming election as well

However, PTI needs to be careful, as the ever-flipping Fazlur Rehman may cause him some problems

PML-N will also be pushing for more control within the province, and since JUI-F always sides with the party which gives them more ‘fodder’, PTI will eventually find that JUI-F will support PML-N once again

The meteoric rise of PTI was based on an anti-corruption rhetoric and youth leadership concepts, which they tried to introduce to the general masses, but as soon as the party gained traction, the tickets went to the old men who were once members of condemned parties and relegated agendas

This disenchantment, which has shown its colours in several PTI meetings due to the disenfranchisement of young workers, will definitely influence the upcoming election where other parties will definitely pander to this segment

Verdict Like it or not, there is a good chance that PML-N will win again

Bilawal Bhutto Zardari may be endearing to some, but he is a ‘toothless tiger’ who reads speeches written out for him by his father’s advisors

Most people may not know this, but the party which wins the parliamentary seats on both sides of the Grand Trunk (GT) Road chooses the prime minister

Therefore, the primary aim of both, PML-N and PPP, is to win as many seats on that belt as possible

The most interesting election, however, will be in Karachi and Hyderabad, where PSP will battle it out with their former friends and colleagues in MQM-P, with both sides knowing each other’s strengths and weaknesses

Pakistanis never vote based on standards of governance or administrative performance

We vote on our perception and more importantly, on ethnic lines

If this were not the case, parties would never have had provincial strongholds despite their gross negligence and maladministration

To be more truthful, Pakistan lacks the basic prerequisites for a functioning democracy

Such votes are called ‘Biryani’ votes and sadly, these are the ones that decide the fate of Pakistan

The coming months will be decisive in shaping the fate of the 2018 election, and given the current political climate, it is only anyone’s guess how the election will truly unravel this time around