Will PML-N and PTI take pages from TLP’s book to gain votes for the 2018 general election?

Home Blog Will PML-N and PTI take pages from TLP’s book to gain votes for the 2018 general election? 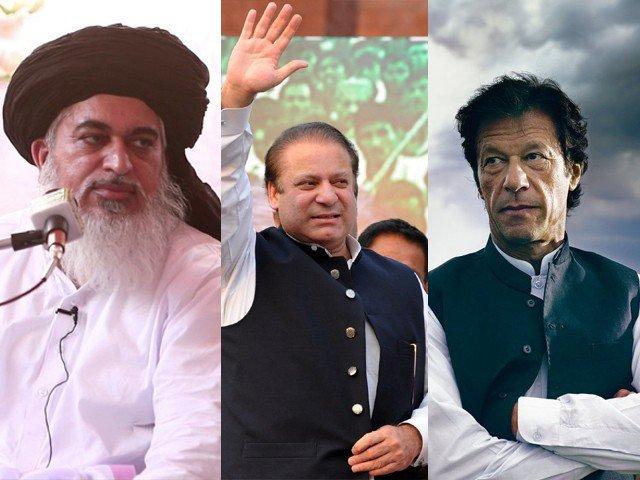 For PML-N, ever since Nawaz Sharif’s disqualification through Supreme Court’s (SC) landmark decision, a question which has constantly been discussed in the media is their political future

According to some, PML-N is in dire state after the disqualification and is facing harsh subsequent events which include Faizabad sit-in and former prime minister’s continuous confrontation with higher judiciary and establishment

At the same time, some believe that despite problems, Nawaz is still popular and PML-N’s vote bank is still intact

Going into election 2018 (assuming these are held on time or held at all), it became imperative to gauge its electoral prowess and this by-election provided a useful means to do that

Likewise, popularity of the main opposition party, PTI, which spearheaded the campaign against Nawaz, also needed to be assessed

On electronic and social media, the party definitely has a massive footprint and furthermore there is absolutely no doubt that today, PTI has more street power than any other political party, matching Pakistan Peoples Party (PPP) in the latter’s heydays

Whether these obvious advantages translate into electoral majority in Pakistan, particularly Punjab, this by-election was an important way to gauge

In addition, everyone was also interested in gauging the prospects of new right-wing party TLP, particularly after the recently concluded Faizabad sit-in

It has been claimed that the party would make a dent into PML-N’s vote bank in 2018 general election, thus benefiting PTI

So how did the three parties fare in the by-election? For PML-N, given the fact that it has been facing problems for some time now, this was a do or die situation

Moreover, this was the seat they have been winning for decades, barring the 2002 election

Local dynamics were apparently in their favour, which actually made it even more important for them to win

Moreover, a defeat would have severely discouraged their supporters and also changed the decision-making calculus of the rational voter – one who votes after taking into account the winning prospects of a party – to a substantial margin

Given that scenario, PML-N has done well as it not only retained its seat but actually increased its vote tally and that too in a by-election

Given that politics is often local, this does not mean that PML-N is going to have a landslide victory in the upcoming election

However, it does show that it’s still well-entrenched in its own constituencies and if the local factors don’t change, the party is not going to witness a total annihilation

It has a fighting chance, unless something drastic happens before the elections

The disqualification of Nawaz apparently has not dented PML-N’s vote bank, at least in their rural and semi-urban strongholds like PP-20 Chakwal

It proves that where local factors favour them, they have a good chance

For PTI, stakes were high though not as high as for PML-N

This was an election; they were expected to lose, though a win would have proven extremely beneficial for them

Although PTI has lost the election by a large margin, at the same time, compared to 2013, they have also increased their vote tally, which is a good sign for the party

However, they need to work better at the local level and moreover expand their message beyond corruption of their rival politicians

This is because the impact of SC’s decision is perhaps there, but not to the extent that the party was hoping

Of course, for majority of the urban middle class supporters of PTI, corruption of Nawaz is the biggest and perhaps the only issue in Pakistan, but the reality is different outside their bubble

When masses vote, their considerations are often not always aligned with “educated” urbanites and that is why PTI has to talk about other issues also, instead of continuously repeating the same things regarding corruption of Nawaz

First time it contested the election in NA 120, it actually got more votes than PPP and Jamat-i-Islami (JI) combined

Although the party had no chance of winning this seat, all political pundits were interested in knowing how many votes it would gain in this election and whether it would actually dent PML-N’s vote bank

The party has gotten more than 16,000 votes which for a nascent and frankly a fringe right-wing religious party is quite high

This is a dangerous development showing that religious extremism is selling and unfortunately, slowly becoming mainstream in the country

This result, however, does not prove that TLP has dented PML-N’s vote bank, at least in this constituency

Nevertheless, this may not prove to be the case in other constituencies as PML-N has traditionally been the major recipient of the Barelvi votes in the past