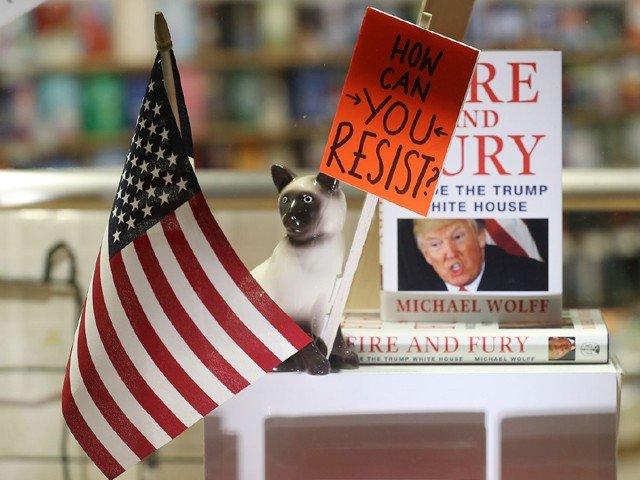 There are readers, editors and writers that prioritise tabloid phenomena

Wolff’s book represents “anti-news,” a big ball of “nothing we haven’t heard before”

After the January 5th publication, revelations surfaced that Donald Trump paid for a woman’s silence regarding his adultery, Trump called developing countries depositories of faecal matter, all the while Wolff’s book surpassed a million sales

If we exercised “intellectual triage”, and read only the most urgent news, we would ignore Wolff’s book and other excess

As painful as the Trump presidency might seem, obsession with his idiocy misallocates thought, as seen on air time given to #Covfefe or  “Melania Trump slammed for ‘incredibly tacky’ Christmas selfie”? And adding to that list is this piece of “news” from CNN: “Trump takes two scoops of ice cream with his chocolate cream pie… while everyone else around the table gets just one”

If you enjoy such coverage, then go for it, buy Wolff’s book

Why focus on what is happening with North Korea, Jerusalem and immigration? Certainly Trump’s character must be examined, but what revelation does Fire and Fury offer? Gauging from the reviews, “none”! But whatever the book reveals apparently does intrigue people

Hence, it seems we read not to be informed but entertained

Masha Gessen, at The New Yorker, begins with “The President of the United States is a deranged liar who surrounds himself with sycophants,” and offers the “revelations” that “Wolff’s writing is a rehashing of gossip”, “comically bad”, and that “Wolff doesn’t bother with corroboration”

This latter point seems crucial, we do not need to exaggerate or fabricate Trump, but if we do, we lend credence to conspiracies regarding “fake news”

Trump has done so, calling Wolff “mentally deranged” according to The Guardian

And veracity in such a book should matter

Adam Kirsch, at The Atlantic, references David Shields’ manifesto on literary culture, Reality Hunger, and how “nonfiction” relies on “fictional” elements to create superior art: “If Michael Wolff is writing fiction in Fire and Fury, this is the kind of fiction he is writing

Indeed, at the very beginning of the book, in an author’s note, Wolff declares himself an unreliable narrator

” As a literary gesture, this may work, but not as journalism

To skewer Trump, don’t compromise; don’t open oneself to accusations of “fake news”

Perhaps better to go full satire ala The Onion: “New report finds adult film star may have paid over $130,000 to cover up sexual encounter with Trump”

Or be thoughtful, like David Brooks, at The New York Times, who writes, “We anti-Trumpers have our lowbrowism, too, mostly on late-night TV

” In a world where the “celebrity sinecure” overwhelms us, we (editors, writers and readers) must turn away from tabloid schlock

Trump tell-alls are the epitome of tabloid schlock

His book, though wonting on brevity, may turn out to be as prophetic as Animal Farm

Jay McInerney, in The New York Times, noted that Wallace’s “emergent theme is that we as a nation are amusing ourselves to death”, that we risk “entertaining ourselves senseless”

And since Trump’s 2016 victory, the media often bypasses serious news for the sick joy we have in exposing “what dumb thing Donald did”

The consequences, hopefully only in a figurative sense, may be fatal

There are better ways to “resist” than losing our minds

Strengthen the positions of independent conservatives, libertarians and classic liberals

Reject the authoritarian aims of control-leftists and the alt-right

For being “anti-Trump” does not indicate being pro-anything

If we want to truly resist Trump, we cannot catapult celebrities to positions of power

And that includes not chanting for Oprah Winfrey in 2020