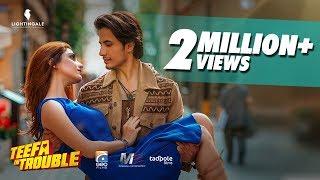 The trailer starts off with a beautiful aerial view of Lahore and soon we are introduced to Teefa (Zafar) who is hired by a rich father to kidnap a girl, Anya (Maya Ali), so that his son Billu Butt (yes! You read that right, that is the name the writers went with) can marry her

Teefa is aided by his close friend, Tony (Faisal Qureshi) in this quest

Things go wild when Anya’s father, Bonzo (I don’t know who came up with these names), comes into the picture, while Teefa and Anya start falling for each other

Although the movie has a promising premise, beautiful locales, a charismatic cast and a high production value (it has been touted as the most expensive Pakistani film ever made), the trailer has got nothing good going for it

Teefa in Trouble is supposed to be a comedy-action-adventure movie, but most of the comedy scenes seem forced

We only get glimpses of action sequences in the closing seconds of the trailer, where Teefa fires a couple of rounds of pistols and the viewers also get a peek into a knife fight between Teefa and some goons

I watched the trailer again in a booked cinema hall and to my surprise none of those present laughed even once while watching the trailer, except for the scene where Zafar calls himself Iron Man while holding a clothes iron

In one particular scene, Maya says, “I have an offer for you two

” To which Ali Zafar responds, “Buy one get one free?” I really hope the movie has at least some dialogues which are actually funny and not cringe-worthy like this one

Ali Zafar surely is talented and has good acting chops which he has proven in Bollywood, but Teefa in Trouble is his debut in Pakistani cinema and I am really hoping that he will hit it out of the park in his home ground

However, for him to do so, the movie would have to be a lot better than its trailer

Pakistani filmmakers need to understand that a movie does not only have to look good, but needs to have an engrossing script as well

I have my fingers crossed for Teefa in Trouble which releases on July 20, 2018