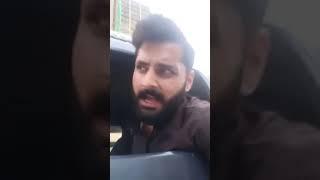 It demeans a person; humiliates them

While it’s physically not as painful, the psychological and emotional wounds are much deeper and agonising

The manner in which Mohammad Jibran Nisar was dragged, slapped and bundled in the police van yesterday, on the orders of a Sindh High Court judge for “not giving way” to his vehicle, is symptomatic of the fascism our society has faced for thousands of years in one form, shape or the other

After previously receiving their due share from those more powerful than them, our feudal lords, sardars, nawabs, maliks, chaudhrys did the same

We have been slapped by military rulers, civilian administrators, supreme courts, high courts, as a matter of fact every court

We have been slapped by our politicians, Imran Khan included

By our preening bureaucrats

By our business people

And by the most sacred of cows, the purveyors of our final salvation, the religious clerics! In fact, every and any person and institution, which was and is powerful and thought they were above the law, has slapped us

But occasionally, a mad hatter like Jibran decides not to

Jibran has been fighting the fight for a long time; he challenged the “power” and stood up to those who have been abusing their status

On some occasions, I’ve had serious differences with him in his support of causes which I think are questionable, but I have to admit that Jibran and his defiance symbolise the rare awakening of a society cowed down by the “slaps” of the powerful

com/watch?v=DvN61DdGO2M I don’t know what will happen to him but I pray for his safety and security

I pray that he wins a seat in the provincial assembly

Whether it emanates from someone in uniform or out of it! I wish I had that courage! Perhaps in the long run, the salvation of our society and our country does lie in a defiance like Jibran’s, against this arrogance of entitlement and display of uncouth, uncivilised, illegal power

Perhaps it does lie in finally standing up to the established order after a millennium of slaps! Perhaps technology, especially smart phones, the internet, social and mainstream electronic media are the harbingers of this revolution and not guns, germs and steel

Perhaps the salvation is not in the hotchpotch political mess we see today across all political parties, using questionable strategies to come into power

No exceptions! Pakistan Tehreek-e-Insaf (PTI) included! Perhaps this will become the proverbial slap that is heard all over Pakistan and changes our destiny