Mulk unmasks terrorist attacks and Muslims in India, but can it do justice?

Home Blog Mulk unmasks terrorist attacks and Muslims in India, but can it do justice? 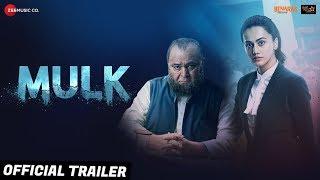 The trailer shows a Muslim family whose son is a suspect in a terrorist attack, which leads to the entire family being persecuted

Kapoor portrays Murad Ali Mohammed, the head of the Muslim family who now has to prove his loyalty towards his nation

The trailer includes scenes from the courtroom, reminding one of Pink, and promises an intense emotional ride with a very gripping plot

Pannu did a brilliant job in Pink, but in this film, she gets to be the one asking the questions

As an actor, Rana has proved his mettle time and again in movies like Dushman and Sangharsh

With this film, I am sure he will be aiming to achieve what Amresh Puri did in Damini

As for Kapoor, there is no doubt he is an extremely talented and versatile actor who can pull off any character, but in this one, it is hard for me to buy him as a bearded and devoted Muslim

For me, Kapoor is simply not believable as a bearded Muslim trying to regain his lost honour and prove his loyalty to his country

Since then, the movie has been labelled “pro-Muslim”

I, for one, believe the movie is showing what has transpired in the past, and tries to address an important issue which will only claim more innocent lives if not resolved

com/anubhavsinha/status/1018564166490058752 The movie has been directed by Anubhav Sinha, who has movies such as Cash, Dus, Ra One and Zid on his resume – clearly indicating that Sinha is not the master of his art

His movies are flawed and not well executed, and most of the time they don’t even have a decent plot

Mulk may have a plot with a lot of potential, along with an extremely talented cast, but it also has a director who has churned out one bad movie after another

I will be surprised if Mulk gets good reviews and performs well at the box office, because at the end of the day, a movie as important as this requires finesse, which is exactly what Sinha lacks