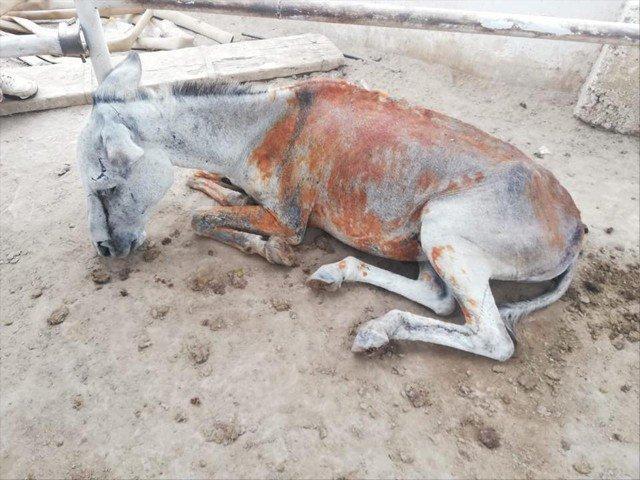 This is the story of Hero, a donkey that remains in critical condition after violent abuse

Every time I think our morality and apathy has hit rock bottom, I am proven wrong by another heinous incident that brutally violates norms of human decency and shreds any form of animal welfare

The more animal welfare is highlighted and the more awareness we all raise, the more people are in defiance or denial; going from bad to worse

On a personal level, I stop every donkey-wala in my neighbourhood, constantly educate my staff, friends and even strangers and get them to be kind to animals, whether it is a bird, a dog, a cat or a donkey

But it seems all is lost

Almost instantly, it went viral, being shared on various profiles, pages and groups

The post with the heartbreaking pictures of the beautiful beast of burden bleeding profusely from his nose, eyes and other areas, just sat there haunting all of us at 2:30am

Not because we could not help him then and there, but because of the disbelief that someone would write a politician’s name on a donkey and proceed to violently abuse him over and over again

The shock consumed all of us that while we allegedly work towards a better Pakistan, behind the scenes, the situation is just dire

[caption id="" align="alignnone" width="487"] Photo: Screenshot[/caption] Sadly, this is not the first case I have heard of, seen or been involved with

It is just the first case that has gone viral

In the past, I have heard of and seen photos of dogs and wild boars being labelled with the name of some politician and beaten to a pulp

Apart from these “hate crimes” against animals that are used to settle scores, the plight of animals in Pakistan is all too real

Every single day, there are posts on social media, reports to the Ayesha Chundrigar Foundation (ACF) team, of animals being either poisoned, shot, discarded, abandoned or tortured by people on the streets

At ACF, I have met dogs and cats who have had boiling water thrown on them, puppies and kittens who have been burnt with lighters and had their nails pulled out for fun

Dogs and cats hit by cars and forever left disabled, and shot with pellet guns – all for entertainment and/or because no one thinks twice

All because they cannot speak for and defend themselves

Be it the animals suffering in dirty cages at Empress Market, or beloved pets snatched from their homes to be sold off, from importing wild animals to sell to people as pets to caging beautiful beasts who were born to be free – the onus is on us

I keep hearing everyday, “Oh but people suffer too, why would anyone help animals?” There is a simple answer

Helping animals does not preclude helping humans in need

Their needs are simple

Animals are pure, they are innocent, they don’t lie and cheat, they are not vindictive, they do not steal and they are just good in and out

If you cannot be empathetic and kind to an animal and respect their right to co-exist in this land of ours, how do you expect to pay heed to the struggles of human beings? It is also easier for people to help animals

It is the basic starting point of humanity

Hero was one of the lucky ones to have been rescued

At 2:30am, most of the ACF team, who works tirelessly all day, was asleep

After seeing Abdullah’s post, a senior ACF member posted all the details and location for the donkey on our rescue collaboration group and I reached out to Mr Muhammad Adeel from Innocent Pet Shelter (IPS) to appeal to him to somehow rescue this donkey on behalf of ACF and get him to safety

Within 10 minutes of receiving the information, Adeel raced his way to the donkey who was lying on the road just waiting to die

Laboured breathing, in agony and bleeding

His eyes lifeless and all hope lost

We hired a van by some miracle at 3:00am, and Adeel waited by the donkey and helped load him into the van, all the while coordinating with the ACF rescue officer and night shelter manager

And finally they were on their way to safety

More often than not, small animal welfare groups sprouting in every corner of Pakistan have to compete with each other for limited resources rather than collaborate

For Hero, who was in critical need, ACF and IPS came together for a common goal: to save his life no matter what

Donkeys internalise their pain; unlike other animals who will react out of fear or run when scared, donkeys freeze

Yet they are one of the most mistreated animals in Pakistan

Hero is now at ACF, receiving the best possible care and being given lots of love, the best quality food and rehabilitation by seasoned professionals, so there is hope for Hero, though he remains in critical condition

com/ACFAnimalRescue/videos/2001651856534051/ How many more “Heros” are out there? How many more have to suffer the same fate? How many more will it take for people to speak up and spring into action? Not every abuse case is or can be viral, or gather as much media attention; in those cases, which is a lot, the animals suffer and die

It’s happening right under all our noses and unless we wake up and face the reality, many more Heros will suffer a fate even worse than death

People ask what they can do

If you see an animal in distress, call for help

Please stay with the animal until help arrives

All too often, people who report an animal in danger don’t give clear directions and rescue teams are left searching in futility

If you cannot stay, please give your number so the rescue teams can reach you from the field

If an injured animal is in imminent danger of being run over, place stones or bricks around it to prevent oncoming traffic from injuring it further or running it over

Puppies, kittens, goats and donkeys can be safely moved by yourself

Unless you have practice, avoid touching adult cats or dogs, who can hurt you because they are in distress

And easiest of all, put a bowl of fresh water out every day for birds and other animals

Stop others from hurting animals

Be kind, it does not cost us anything but can save the lives of many animals

com/ACFAnimalRescue/ Do your bit to save civility, humanity, this country and its inhabitants, all of them