Zesty and witty, Load Wedding uncovers body shaming and marriage like never before 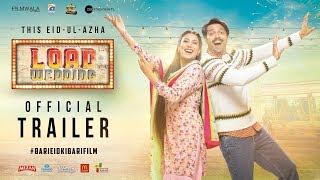 It is obvious, judging by the recently released official trailer, that the subject is captivating for various reasons

One can easily conclude that Load Wedding is a fresh dramedy with a compelling storyline and enchanting music, all set in the background of a vibrant Punjab

However, a red card is shown by Raja’s mother, played by Samina Ahmed, to signify that he can’t marry until his sister Baby Baji gets married

One more thing that is generating some hype is the parody of Dr Aamir Liaquat; clad in a vibrant shalwar kameez, running his game show

Moreover, the trailer also reveals how unmarried, obese women face difficulties in getting proposals, how they tackle fat-shaming and their constant struggle to shed some weight

It seems that the film tackles some of the sensitive social stigmas attached to arranged marriages, divorce, dowry and obesity in a conventional society

The onscreen chemistry of Mustafa and Hayat, along with the performance of Ahmed, looks true to life, and their Punjabi accent is pretty appealing

The music is composed by Shani Arshad

All in all, Load Wedding is a family drama with relatable social affairs as well as zesty entertainment full of robust performances and a witty plot

Load Wedding is slated for release on Eidul Azha

The movie buffs will enjoy diverse films on Eid and it is evident from all the trailer hypes that there will be a tough competition between Parwaaz Hai Junoon, Jawani Phir Nahi Ani 2 and of course Load Wedding