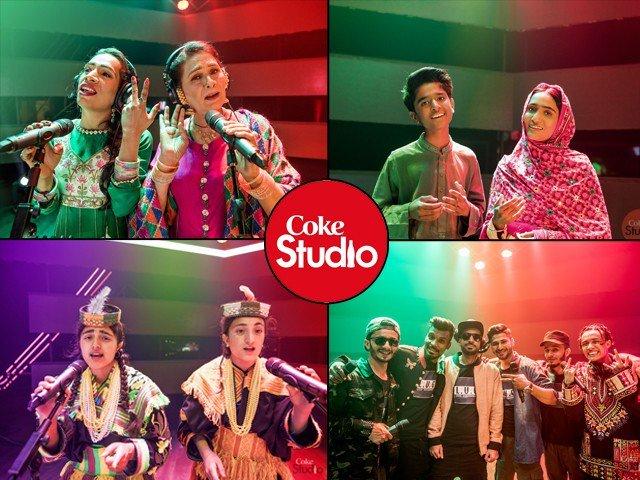 com/watch?v=unOqa2tnzSM Coke Studio has perhaps finally caught on to showcasing new artists that needed mainstream public attention for so long

These new artists are not only well-versed in their melodic symphonies, but also carry a cultural reminder, exemplifying what Pakistan’s diversity means

We also saw some of our favourite legends from previous seasons such as Abida Parveen, Ali Sethi, Ali Azmat, and the dynamic duo, Momina Mustehsan and Asim Azhar make a comeback

The song gave us promising scents of exciting music, culture and youth

Inclusive environment After the country had shown incredible support for Marvia Malik, Pakistan’s first transgender news anchor, the whole nation has come to celebrate a certain sense of inclusivity and tolerance, or at least has taken the first step towards it

Thanks to some of the more prominent media platforms and influencers like Muniba Mazari, Bijli and Roshni Baji, from the transgender community, have entered the limelight into mainstream treatment

However, Coke Studio has taken it a step further by including two trans women as part of their season 11

Lucky and Naghma, the two names that have become the centre of attention for holding the song’s representation on social media, are heard voicing the verse, “Jo main bhi hun aur tum bhi ho” (What I am, and you are too) The verse gives a strong message of trans equality and integration into the society as they still face major disparities in all institutions of social life

Education, economics and employment are still forms of sparse convenience for them

com/namaloomafraaad/status/1021067886851444736 Simultaneously, giving them a chance to showcase their talent means a more inclusive and tolerant media environment that channels down into public behaviour

Let us await, and show support, for Lucky and Naghma to leave us “shook” by the end of the season

Side note: I’ve heard and seen the video at least 24 times by now, and my body fails to stop vibrating from the goosebumps and excitement that runs through me whenever these two cameo

Hip hop was not a very prominent musical form before some of the viral bands and singers like Young Stunners and Ali Gul Pir, with their satiric music, came onto the youthful trends

Then considering the growing social media influence and musical variability assorted by artists like Faris Shafi and Abid Brohi, the perception of hip hop and rap obscurity has changed

However, these were all independent people making music to their liking and were not included in the mainstream television by big scale media companies

Now, because Coke Studio has involved Young Desi and Lyari Underground to the scene, we may witness a more wholesome lyrical ambiance after they give their drums a beat

Culturally native artists Throughout the years, Coke Studio has attempted to include more culturally diverse music by showcasing native artists and their music such as Mai Dhai and Arif Lohar

This season, accordingly, has seen the incredible addition of some of the growing bands like Khumaariyan, a Pakhtun amalgamation, and Sounds of Kolachi, along with the return of The Sketches, a celebrated Sufi band from Jamshoro, Sindh that last appeared in season four

With the success of ‘Pareek,’ the Kalash culture is also represented in the season by the talented duo, Ariana and Amrina

As Vishnu and Shamu Bai stole our hearts in ‘Faqeera’, we will perhaps experience more heart-warming music by the young talents

This season seems to have made a very strong effort to cast an all-inclusive and representative musical spirit, painting a vibrant picture of Pakistan for the world to see

It is perhaps to show us how togetherness is what makes us beautiful, to prevent a divide and to convey solidarity amongst the nationals

com/bananapeppersx3/status/1021093460860915713 Overall, in the literal and metaphorical heat of the moment that Pakistan faces, Coke Studio has brought a breath of fresh air

Through showing inclusivity and giving a platform to young talent, it has taken on a responsibility that most media platforms should take

Perhaps this attempt would bring the country together through cultural exposure

Promoting tolerance and a sense of a unified national identity is the overarching theme for this season, as their motto goes, “celebrating unity in diversity”