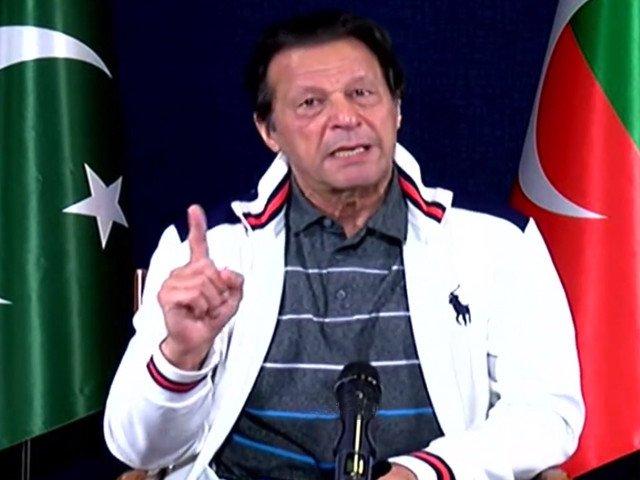 Pakistan Tehreek-e-Insaf (PTI) Chairman Imran Khan on Tuesday announced he would be challenging the recent amendments to the National Accountability Bureau (NAB) Ordinance in the Supreme Court, saying they were tantamount to “legitimising” corruption

“I will challenge the amendments to NAB law in the Supreme Court this week… this new law is disrespect to the nation and the country,” he said while addressing a press conference in Islamabad on Tuesday

The government’s decision to steer the legislation into law was vehemently condemned by Imran who termed it a “black day” in the country’s history, charging the "imported government” with ending accountability

Condemning the move on Tuesday, Imran said the said amendments would “promote corruption and money laundering” in the country as they were tantamount to issuing licenses to steal

Also read: PTI observes 'black day' to mark protest against NAB law tweaks Meanwhile, the ex-PM, while reiterating that no country could progress where justice was not served, sent a clear message to the quarters concerned that history will not forgive all those who have imposed the imported government on the country

“I want to give a message: history never forgets anyone; history will not forget all those who have imposed these people [government] on us,” ex-PM said in an address in the capital

He said that country’s progress was linked to the implementation of the rule of law, which means no one was above the law

He stressed that countries, where one class is considered above the law, are destroyed and have no future

Imran pointed out the country didn’t lack resources but in providing justice, saying the country cannot progress till the big criminals are brought under the law

Calling the passage of the NAB law an insult to the nation, Imran said that the rulers should be put in jail just for shamelessly amending the NAB law

PTI chairman hoped that the top court would take notice of the NAB amendments, saying the “imported government” did not come to power for the people but to end its corruption cases

Emphasising that laws cannot be person-specific, ex-PM said that amendments in NAB law would be beneficial for former premier Nawaz Sharif and his daughter Maryam Nawaz as well as former president Asif Ali Zardari, regretting that corruption cases worth Rs1,100 billion will be now closed in the wake of amendments

The new law, he said, clipped the powers of the anti-corruption watchdog as NAB will not be able to deal with money laundering cases

From now on, he said, the money laundering cases will be dealt with by the Federal Investigation Agency (FIA), which works under Interior Minister Rana Sanaullah

After the amendments, Imran said, the money that will be transferred to fake accounts will have to be proved by NAB instead of “thieves”, saying it is already extremely difficult to detect white-collar crime in the world

Following the changes, he said, all those facing cases of assets beyond means will be saved

Referring to Panama cases that brought expensive London flats to light, he alleged, the real owner of the most expensive flats in Panama was Maryam Nawaz

In addition, he pointed out that after the amendments any bureaucrat who makes property in the name of children will not be held accountable

He further said that his opponents even tried to blackmail him during FATF legislation but he didn’t accept their demands, regretting that they have now given themselves an NRO

Before this, Imran said, former military ruler Gen (retd) Pervez Musharraf had given them NRO despite an affidavit of former finance minister Ishaq Dar detailing how did the money go out of the country

"Former US Secretary of State Condoleezza Rice wrote in her book about how corruption cases of former rulers were disposed of, saying only small thieves were punished in the country while the bigger ones remain untouched