Misbah’s cautious approach is as unchanged as his squad 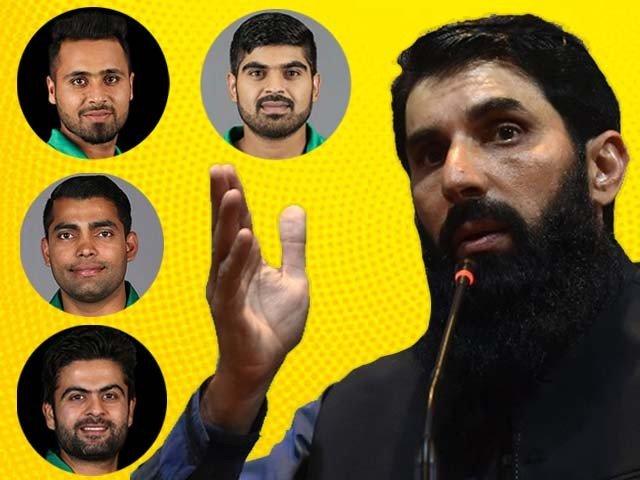 It boggles the mind that when Pakistan is playing a weak Sri Lanka side, that too in front of a home crowd, why has Misbah opted for such a safe squad? This is the time to provide up and coming youngsters with a platform which they can use to display their talent and gain some much needed experience

Building a good T20 unit at this point in time is all the more important given that we are just a year out from the all-important T20 World Cup, which will take place in Australia

Instead of injecting new blood into the Pakistan team in preparation for that tournament, it looks like Misbah has decided to revert to the same tried and tested players, many of whom have proven that they do not merit an inclusion in the squad

Unfortunately, this guarded and safe approach is something which was prevalent even during Misbah’s reign as captain of the Pakistan cricket team

I watched every single game Pakistan played during the Misbah period, and it was a period where hardly any youngster was given a chance; and even if they were, they were given limited opportunities

The same seems to be happening here

Now, although Ahmed Shehzad did put up a decent showing at this year’s edition of the Pakistan Super League (PSL), I still feel that including him in the team is the wrong move because the Fakhar Zaman and Babar Azam opening combination has thus far worked wonders for Pakistan in T20 matches

The duo have consistently gotten Pakistan off to a good start, and it is this very combination that has led Pakistan to the number one spot in the T20 rankings

Why tinker with that by throwing an opener like Shehzad into the mix? [caption id="attachment_88703" align="alignnone" width="600"] Ahmed Shehzad walks back to the pavilion after losing his wicket

When will the selectors realise he simply doesn’t have the ability to play in the international arena? Yes, he had a good outing against Sri Lanka in the last ODI, but that does not change the fact that his technique is poor, and he consistently fails under pressure, as he did for the Karachi Kings during their crunch knock-out games

Instead of Ahmed, I would have picked Shoaib Malik

While Malik’s ODI career came to an end at the World Cup earlier this year, he has been in scintillating form in the T20 format; averaging 40 ever since his comeback in 2015

He is currently playing in the Caribbean Premier League (CPL), where he is averaging 60 at a strike rate of 119

If Misbah is hell bent on including experienced players in the squad, why not take advantage of Malik’s terrific form and include him in the team? His experience could prove to be vital during the next T20 World Cup

The inclusion of Haris Sohail is also concerning

While I am a big Sohail supporter, and have been for the past seven years, he does not deserve a place in the T20 squad, solely due to his lack of power hitting ability

As a result, the only position I can see Sohail being successful at is if he bats at number three

However, this is now unlikely given the inclusion of Shehzad, which will probably push Azam down to number three

[/caption] Instead of Sohail, I would have selected either Khushdil Shah or Saif Badar

Shah has been in tremendous form in white ball cricket over the past two years, and both him and Badar are two of the only upcoming batsmen in Pakistan who have a natural affinity for power-hitting

Badar’s performance in the National T20 tournament was quite impressive, and he averaged 41 at a strike rate of 131

His most remarkable innings came during the final of the same tournament, where he single-handedly won the match for his team, nabbing the man of the match award in the process

Badar’s game is also suited for bouncier wickets, which the Pakistan team will find plenty of during the T20 World Cup next year; which is why now is the time to start grooming him

I am also disappointed at the inclusion of Faheem Ashraf

Although he is a talented player, Ashraf has largely failed for Pakistan at the international level

He has been selected in the team as an all-rounder, yet he averages only 11 in the format with the bat

I would have selected Aamer Yamin instead, who is a far superior all-round cricketer to Ashraf

Additionally, while some have been criticising the inclusion of Umar Akmal, I see it as a positive move

On statistics alone, Akmal was the best batsman in the Pakistan domestic circuit last year

Regardless of what you may think of his past performances for Pakistan, he is undoubtedly in terrific form right now

Prior to Misbah’s announcement as head coach and chief selector, I stated it would be a poor decision to appoint Misbah as the selector, purely due to his track record of hardly giving any youngsters a fair chance while he was captain

This team selection does little to assuage those concerns