Why is Monal allowed to operate inside a national park?

Home Blog Why is Monal allowed to operate inside a national park? 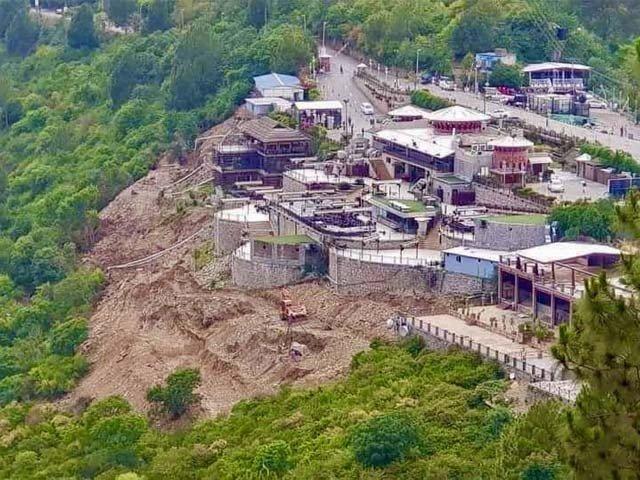 The owner, Luqman Ali Afzal, who claimed he had won the bid for the 15-year lease fairly from the Capital Development Authority (CDA) back in 2006, was even awarded a Pride of Performance for his entrepreneurship recently by the president of Pakistan

Up until this week, it seemed that we had all been resigned to the fact that Monal was now a permanent feature of Islamabad’s landscape and in fact a popular tourist site for visitors to the city

However, its complacent owner clearly went a step too far when he decided to undertake a quick expansion during the recent lockdown in the country due to the coronavirus

While most restaurants were shut and people in the capital quarantined inside their homes, the owner decided to bring in heavy equipment and cut down around 300-400 trees in five acres of forest land in the vicinity of Monal

On Wednesday, Advisor to the Prime Minister on Climate Change Malik Amin Aslam, visited the site to see for himself what had happened on the ground

He invited along media personnel, environmentalists and the head of the Islamabad Wildlife Management Board, Dr Anis ur Rahman (who now manages the Margalla Hills National Park)

Aslam, who has been spearheading the 10 Billion Tree Programme across Pakistan, had already initiated an FIR against the culprits, citing the Margalla Hills National Park to be “a national resource which shall be protected at all costs”

He said, “Clearly land grabbing has taken place inside a national park

We want to send out a strong signal of zero tolerance

Most weekends the winding road leading to the restaurant is packed with cars, which disturb the wildlife of the park

It was then chairman of the CDA, Kamran Lashari, who had the winding road up to Monal expanded and lit up with street-lights which stay on throughout the night

He is alleged to have been behind the construction and leasing of Monal, the modelling of Saidpur Village and the establishment of Rawal Lake Park, amongst other developments in the capital

He was removed from chairpersonship of the CDA in 2008

In my younger days all we had was Daman-e-Koh, the lovely viewing point and hill top garden from where one could watch the sun set over the capital

I remember a few khokas (kiosks) selling chips and cold drinks, which was all one really needed – families would often bring picnics with them and leave once it was dusk

There were also several garbage bins located inside the gardens

Monal was built a few kilometres uphill from Daman-e-Koh on Pir Sohava road on a breezy hilltop with great views of the city, especially at night

15 years have passed since then and Monal might well be an iconic eatery of the city, but its owner has clearly bitten off more than he can chew with his brazen cutting of trees and shrubs around the restaurant

Imran Khalid, an environmentalist and researcher at the Sustainable Development Policy Institute in Islamabad best sums up the feelings of most environmentalists in the capital, “The next step should be to shut down Monal as its presence goes against the premise of a national park

Its construction is in fact against the spirit of the law

No environmental impact assessment was conducted

The issue was forced

Moreover, its operations are a hazard to the environment and wildlife