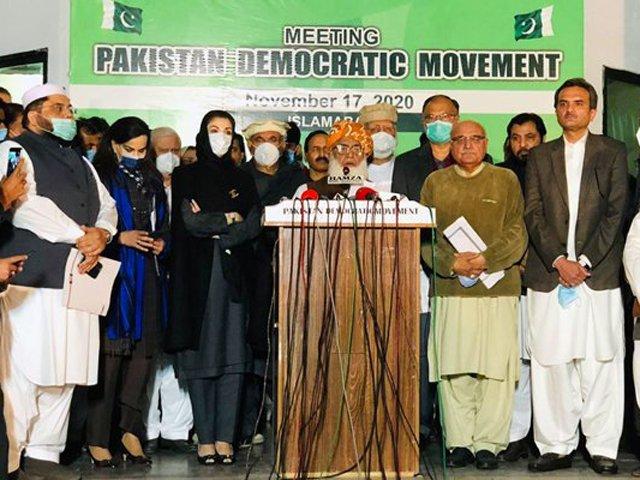 The Pakistan Democratic Movement (PDM), the 11-party opposition alliance, announced on Tuesday that it would proceed with its rallies despite the ban imposed by the government in the wake of the rapid rise in Covid-19 cases in the country

The alliance, formed to send the government packing, also rejected the results of the recent elections in Gilgit-Baltistan, where the ruling PTI has emerged as the leading party

During a meeting of the PDM leaders in Islamabad, a five-member committee was formed to finalise the ‘Charter of Pakistan’, which would be signed by the leadership of the constituent parties at the alliance’s public gathering in Lahore on December 13

Speaking to reporters after the meeting, JUI-F chief Maulana Fazlur Rehman, the president of the PDM, said the alliance had rejected the government’s decision to suspend rallies and public gatherings on the “pretext” of Covid-19

Until a day before yesterday, the ruling party was itself holding rallies,” he added

“The entire country is open

This ban has been imposed because they [government] fear the PDM

The rallies will go ahead as scheduled

” The rallies are scheduled to take place in Peshawar on November 22, in Multan on November 30 and in Lahore on December 13

The alliance had already staged rallies in Gujranwala, Karachi and Quetta

Accompanied by other PDM leaders, the JUI-F chief said the PDM had rejected the results of the G-B polls as they were rigged and a “repeat” of the 2018 general elections

“The elections were ‘stolen’ from the people,” he claimed, adding that state resources were used for this purpose

The PDM in its meeting formed a committee comprising PML-N’s Ahsan Iqbal and Khurram Dastgir, PPP’s Sherry Rehman and Raza Rabbani and Murtaza Kamran to finalise the ‘Charter of Pakistan’ to restore “real” democracy in the country

However, the alliance agreed on a dozen goals

They include ensuring the supremacy and protection of federal, democratic, parliamentary and Islamic constitution's supremacy; independence of parliament, distancing establishment and intelligence agencies from politics; establishing an independent judiciary, reforms for free and fair elections; protection of the public's basic and democratic rights; protection of provincial rights and 18th Amendment, establishment of an effective mechanism for local governments; protection of freedom of expression and independent media; elimination of extremism and terrorism; introducing an emergency economic package to eliminate poverty, inflation and unemployment; and protection and implementation of Islamic sections of Constitution

The JUI-F chief ruled out any chances of negotiations with the government, saying that the ruling PTI did not represent the people

“His [Shabbar] confession is an FIR against the government,” he added

However, Shabbar, following the Maulana’s news conference, tweeted that the claim was “incorrect”

He is great leader and a warrior against status quo

I respect and salute him,” he added

Speaking to reporters after the meeting, PML-N Vice President Maryam Nawaz said she had suggested to the constituent parties of the PDM to rid themselves of “turncoats”