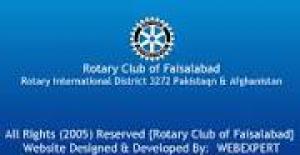 A few philanthropic of Faisalabad associated together and decided to work for the eradication of Tuberculosis from the Faisalabad District. The Association under the name and style of District Anti TB Association was established in 1957. The old building of Civil Hospital was occupied by the Association and started the treatment of TB patients. The Association established an indoor hospital also. At present, the Association is in possession of 33 kanals of land on a 30 year lease, extendable to 99 years.The Association proposed to construct a 200 bed hospital but completed only an 80 bed hospital due to non-availability of funds and could not complete it up till now. The Association is running an 80 bed hospital and two outdoor clinics. All the TB patients are provided with medicines, board and lodging and other facilities free of cost. The expenditures are met by Help from the general public. There are some patrons who took a keen interest in the Association. The lab and the amount of equipment is small because of the limited amount of space . The Association is constructing a larger lab that will be well-equipped. The expenditure is more than 20 million rupees and the completion of a 200 bed hospital needs 50 million rupees. The number of patients is increasing day by day. The Faisalabad District is in a congested district. Most of the population are laborers working in different factories and more than 50% of the laborers are TB positive cases which is primarily due to pollution, crowding, low standard of living, etc. The annual expenditure for medicine is approximately 2.5 million and the kitchen expenditure is more than 1.2 million. The number of patients, as a recorded in the hospital books, during 2008 was 100,684. The number of new patients during 2008 was 32,600. The number of female patients was more than the male patients. Two specialist doctors are looking after the patients and, apart from that, there is one medical officer for the indoor patients. Our prime need is adequate lab space and qualified medical staff and technicians. If we engaged full strength, the expenditure of the staff will increase to more then 6 million. The Association is providing TB patients with medicine free of charget. A new X-ray machine has been purchased last year for Rs. 2.7 million. The major portion of the X-ray machine was donated by the Rotary Club Faisalabad. The TB disease is spreading and has become uncontrollable due to non-availability of funds. The Association is being run by elected members and all of its accounts are being audited.