QUETTA: An explosion at a mosque in Quetta martyred 13 people, including a senior police official and a prayer leader on Wednesday, officials said.

The police personnel has been identified as DSP Haji Aman Ullah while the law enforcement agencies have cordoned off the area as investigators search for forensic evidence.

More casualties are feared as several others are reportedly injured.

It is immediately not clear what caused the blast which took place at a seminary in Quetta’s Satellite Town.

The emergency has been declared at all hospitals of Quetta while the authorities have directed the doctors and paramedical staff to be present at their respective duty places.

The mosque blast occurred three days after two men were killed and over a dozen injured – including two soldiers of the paramilitary Frontier Corps (FC) – in a blast near a vehicle of the security forces on McCaughey Road in the provincial capital of Balochistan.

Balochistan has long been wrecked by ethnic, sectarian, militant and separatist violence perpetrated by a potpourri of groups. Pakistani officials have repeatedly blamed “hostile forces” for violence in the province. 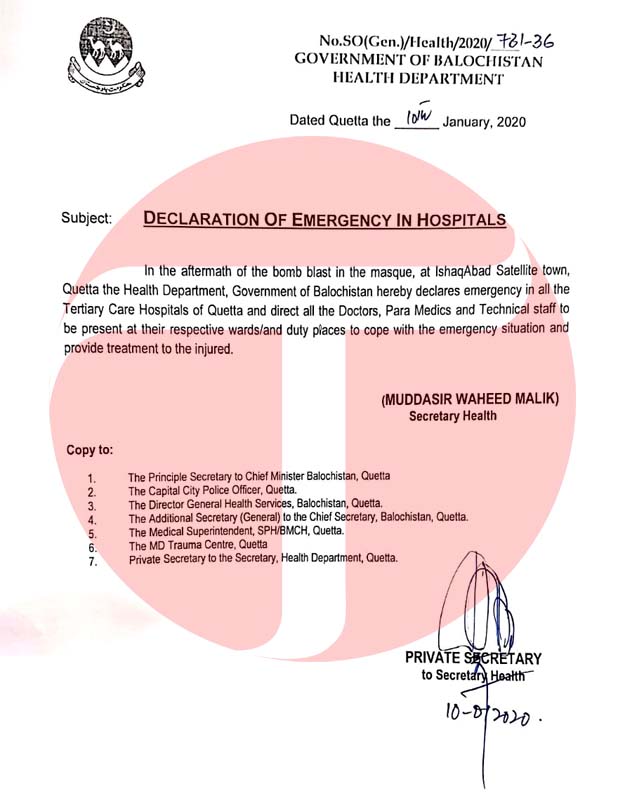 This is a developing story and will be updated accordingly